So, I have an old Jetblaster's CEDA with an Alpha RT Kit installed. Most Prophecy/Retaliator internals can work inside one, and so I took a risk and fit in this Scar Barrel to make up for the fact that I never got the old CEDA Scar that was out there for a while. It sticks out the front of the blaster slightly, but the accuracy increase is decidedly notable!

This is subject to opinion.
The print is what you would expect out of resin, fantastic with no issues.
As for performance. This is where your mileage may very.
My blaster is an Orion Lynx. It’s a very Precise blaster already when well tuned. Very very accurate in the right hands.
Adding this scar I feel helped consistency of the darts. With little to no fps loss. Meaning rather the dart is new out of package Or a used dart that isn’t in to bad of shape they perform in a manner that is much more “equal”.
On a blaster that wasn’t well tuned and in need or more Percision I do believe this scar would help. In all honesty for the price you can’t go wrong ether way.
If your in need of an orange muzzle device and just a slight gain in performance this is definitely the scar you need 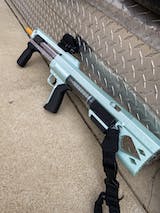 This muzzle attachment is much better than the clear plastic worker rifled attachment. The accuracy this gives to the darts is truly unmatched in my testing. The FPS drop is very little, not even noticeable without a chronograph, yet still imparting the much needed stability to the darts needed to hit small targets constantly at a distance. I would highly recommend this barrel attachment for any high FPS blaster. Like a Lynx. Or a prophecy blaster experiencing fishtail or whirlybird’s. This attachment has been designed well, and I consider it to be a must have on multiple blasters and barrels of different length. But know that this type of attachment needs to be fitted directly to a barrel and not just stuck in the end of a blaster like a nexus or aeon pro where the dart would be shooting from a barrel into the attachment. The actual barrel needs to go inside this device and not be a separate unit. And you will have unmatched accuracy. 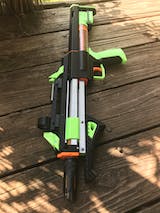 J
Jayson
Not for Nexus

I ordered this knowing it wasn’t recommended for the nexus but wanted to test it out anyways. I also ordered the nexus scar barrel and both shoot to the left.

This barrel in particular is very snug. It’ll fit in the nexus with some force, but good luck getting it off. Hence, not recommended for the nexus.

As far as performance goes. It’s equivalent to the nexus scar barrel they sell. Both were consistent in trajectory while going left. Personally I don’t like having to compensate for it.