PRODUCT DESCRIPTION:
The Gameface Trion blaster is the latest offering from Crossman Brands. It's a new entry in the hobby-grade blaster space, with creature comforts that usually require additional mod parts included out of the box. An affordable, versatile high-power blaster.

PLEASE NOTE: We are no longer able to ship any blaster to international customers (beyond the USA or Canada).

There are so many positive things to say about this blaster like being made of a high quality plastic on par with a high end Airsoft gun that blows away most dart zone products in terms of shell rigidity, The ability to hot swap springs/spacers at any given moment completely toolless, being cross compatible with the majority of half-length dart mags without feeding issues, having a prime sled with built in bearings making a massive difference on the perceived prime and overall is one of the best things about the Trion and comes with a proper 16mm 17/32 barrel right out the box. Despite being mostly positive there is one downside on my model that should be noted, the blaster will occasionally make a clicking sound instead of firing and has been doing so since coming out of the box. The little bit of info currently available for the Trion says it's a known issue possibly due to injection molded plastic burs that should become less of a problem with continued use, and this has seemed to be mostly true. After about a thousand tiring rounds of slam fire to wear mine in, it is happening a lot less than every few shots like at first but still there occasionally. This problem could be a rare defect, but I felt I should share so others know it's there and possible to at least make better. Also, less important but more annoying is the lack of storage for the spring spacers. They are clearly a fantastic idea, and it seems like a large oversight to not have designed a simple storage mechanism to keep them in a secure location for when not in use. Despite the break in period, it Still gets a 5/5 and I could not recommend this blaster enough! 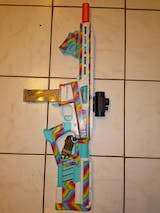 D
Dustin S.
This Thing is a Beast!

I am a noob to the foam blaster world so this is my first “real” blaster. The grips feel great to hold, stock is sturdy and adjustable, and you feel like a god when you fire a **** at 200+ fps haha. This is a great option and Out Of Darts fulfilled my order so quickly as well! Exceptionally happy with the service and product!

A
Adam K.
So Excited

Not much to say just perfection. For performance it hits that 150-200 range. It is a reasonable price. Very slim and minimalistic ergonomics. Love the colorways. Just pure excellence. Really looking forward to this release.