The rail itself functions as a rail and it does require a bit of shell cutting which I already knew prior to purchasing. I don't like how the two longer rails are bent and don't align with the smaller rail. It's not OOD's fault and it probably isn't Worker's fault either but considering these rails have been in boxes and bags during extreme heat, I'll assume that shipping had something to do with my bent rails. 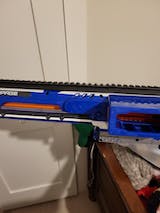