PRODUCT DESCRIPTION:
Add some extra power to your Worker Swift Blaster with this 1.6 upgrade spring from Worker. This kit includes the recommended 550 aluminum barrel to pair with the 1.6 spring.  This combination can also be paired with the 91 degree Worker scar barrel for improved accuracy.

The spring barrel really improve the fos of the darts, coupled with a scar barrel, it have a very good improved performance.

This blaster is a genuinely amazing experience to use out of the box. I played around with both barrel-spring combinations, as well as the supplementary 1.6 spring and extended barrel, and it fires with arguably concerning power and accuracy. As a test to make sure it couldn't actually injure anyone, I used the highest-power spring more or less point-blank, and the circle where the dart hit me is still visible a couple of weeks later. To be clear, this is not a complaint.

What I do have to complain about, unfortunately, is that I ran into a catastrophic failure a couple days in. After several rattling misfires accompanied by some haunting twangs from the spring inside, and after removing the barrel to blow out a stuck dart twice, I noticed that one of the top prongs on the magazine had cracked diagonally, and a sizable triangle of plastic had fully come away. I'm not sure whether the magazine cracked and caused the bad loading, or if persisting in using the blaster through loading issues then damaged the magazine, but either way, it's just never a great look when your blaster straight-up breaks. I've ordered a couple replacement magazines, so we'll see if that really was the issue. Even with the jams, though, I really can't in good conscience rate this blaster badly. It's just that good.

The 1.6 hits just right. A great balance of power and easy priming.

I bought it for the barrel and it is great. To all that don't know, its looser than 17/32 but the darts don't fall out like 9/16. For all those curious, it works with the worker longshot pusher (extreme mods needed to use 55 cm barrel of course)
Maybe the Swift is a Longshot reskin

perfect combo for the swift I am getting shots around 300 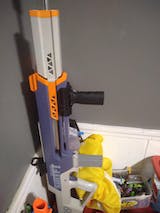